You would be excused to think that Sunday mornings are for lazy lie-ins in bed with a cup of tea and a good book. (In my case they usually are until 9am). Not this morning though, oh no.... up at 5.55 am, out of the house by 6.10 am and on my way to the airport in the dark, in a car driven by my friend Hilly Bouteloup, the instigator of this morning mayhem 🙂 . 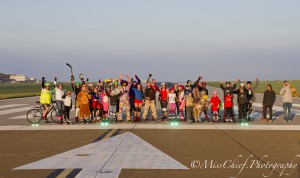 And no, I'm not going to catch a plane, I am going to take pictures of inline skaters,  rollerskaters and skateboarders who are giving their time and sponsorship money to raise fund for the British Red Cross appeal to help people of Nepal rebuild their lifes after the earthquakes of 2015. Some wicked fancy dress costumes were worn!

A group of about 30-40 people (and their back up crews of mum, dads, siblings, grandparents, etc... ) gathered together on the areoclub car park where we had a quick group picture and waited for the airport security manager to give them the safety briefing. The plan was to be on the runway for 7am and have about an hour to from one end to the other and back. But, as we most well thought out plans, there was a fly in the ointment. 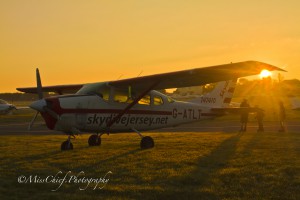 An air ambulance flight was waiting for clearance to go and been delayed due to fog on the South Coast of the UK, the mail plane that was due to land had also been delayed due to said fog. Whilst waiting, we watched a BA plane land and another take off... I snatched a quick shot of the sunrise... Then it was our turn.

The ground crew was sent to the Aviator's restaurant to watch from the balcony, skaters, rollerbladers and skateboarders were herded through 2 security gates onto the end of the runway, a short wait later they were lined up to the start and they were off !

The ITV camera, the JEP photographer and yours truly were given a lift on the back of the luggage truck for best photo opportunity... 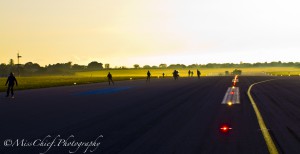 Off they went, some flew accross the runway, others were a little bit slower but most made the run up and down.

The run was not without casualties as within the first 5 minutes, one of the teenage skaters fell over, hurting her knee and having to retire, a little bit further a younger skater also fell and retired. The group was very well escorted, a bus was following behind,picking up casualties, a fireman's car alongside, togethere with  a couple of other vehicles . And, half way through, the airport firetruck gave everyone a big hoot to encourage them. It is worth mentioning that the airport crew that was chaperonning our motley crew was composed of volunteers who were also giving up their time to make this possible. 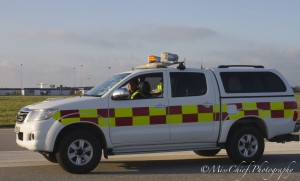 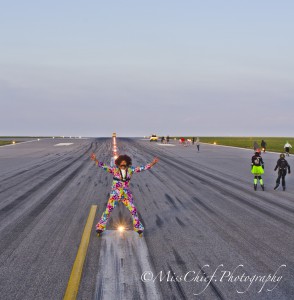 I couldn't resist taking pictures of Mr Disco Man, A.K.A John Bouteloup, the chair person of the Jersey Inline Skate Club. Once at the end of the runway, they all gathered for another group photo and then proceeded to skate back to the starting point, urged forward by our chaperonnes as another planes was waiting to land. At this point I have to thank the airport lighting personnel who had put the lights on especially for the run. This gave extra sparkle to some of the shots. It was an amazing opportunity to be able to take shots on the runway, where the black tyre marks can clearly be seen.

A couple of ladies from the Jersey Royal Rollers were also seen gliding at speed down the runway. 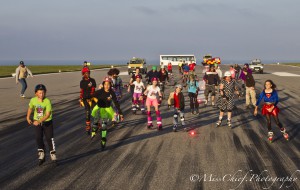 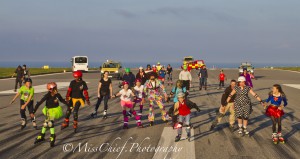 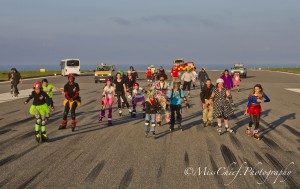 And it was all over in a blink, far too soon according to all those that took part, it was time for me to play tv assistant and hold the microphone for the cameraman to interview a few of the younger participants. And then a cup of hot chocolate and croissant at the Aviator restaurant, and take part in the final fund raiser, a raffle organised by Beverley and Nick from the British Red Cross, and warm up before going home, as the early morning start had been a tad chilly.

The run raised over £1000 for hte charity so far, so thank you to everyone involved. 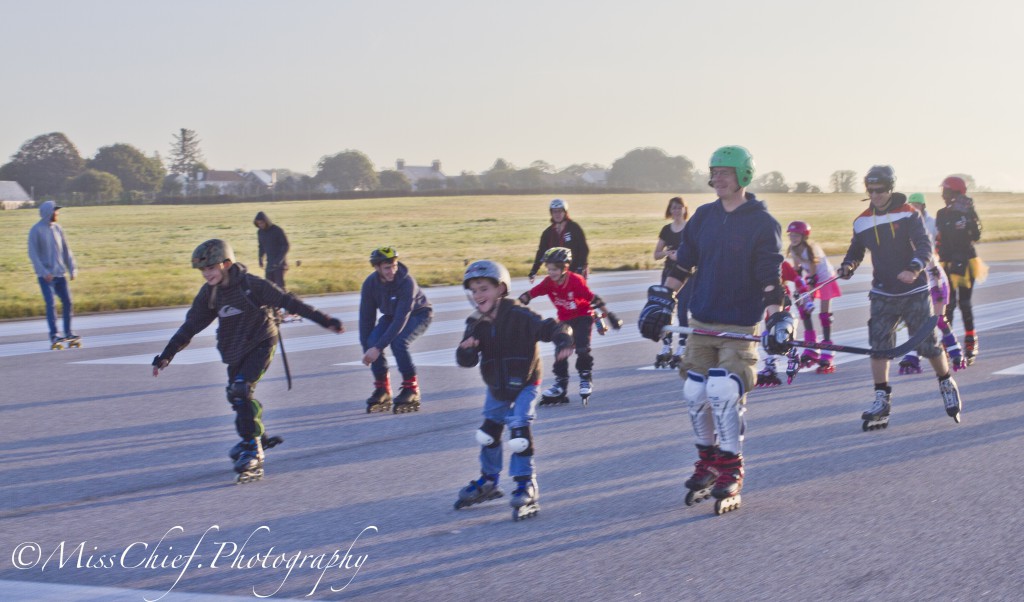